Once upon a time, I lived at 85b, Paulet Rd., S.E.5. Now part of the ‘Minet Conservation Area’, number 85 sits on the east side of Paulet Rd. and is one of a long row of three-storey Victorian terraced houses that run between Denmark Rd. and Lilford Rd.

To my mind at least, the east side of Paulet Rd., with its London stock brick construction evokes a strong sense of history.

Sadly, with the exception of five houses that survive at the bend in the road to the north, the entire west side was demolished in the 1960’s and replaced by a housing estate.

While trying to research that very history, I unexpectedly came across two brothers that apparently lived next door at number 83, Albert Victor Cawley and Frederick Edward John Cawley.

What captured my interest in the Cawley’s was that tragically, both Albert, 19 and Frederick, 25 were killed on the same day, 15 September, 1916, serving alongside each other in the same regiment, the 1/15th (County of London) Battalion (Prince of Wales’s Own Civil Service Rifles), in the same battle, the attack on High Wood at the Somme.

In 1911, before the outbreak of the First World War, the Cawley family were living at 23, Warrior Road, S.E.5, a street to the north of Camberwell New Road.

Long-since demolished and replaced by the Brandon housing estate, Warrior Street ran between Farmers Road and Pitman Street, themselves now altered almost beyond recognition as part of the same redevelopment.

The census of England and Wales reveals that Frederick, then 18 was a stationer’s shop assistant, whilst Albert, 14 was privileged enough to be a Scholar at Christ’s Hospital School in Horsham, West Sussex.

‘CH’, as Christ’s Hospital is often abbreviated to, is the original charity, or ‘Bluecoat’ boarding school, founded by King Edward VI in 1522 to provide ‘a little learning for fatherless children and other poor men’s children’, accepting especially children of families in social, financial or other need.

Albert’s father, Edward James Cawley, a house painter, earning on average £61 a year, applied to CH in 1908, and Albert was admitted that same year, on 16 September, having gained a London County Council (L.C.C.) scholarship to the school.

He was in one of 14 senior boarding houses, Barnes A, the house for which is pictured below. Albert left ‘CH’ on 19 December, 1913 and received what was known as ‘The First Bible’.

With its superior binding, this was issued to boys who were either monitors, as in Albert’s case, or heading for Oxbridge (as Grecians, i.e. sixth form pupils)

Whilst the heading ‘Mathematical School’ denotes that Albert was in the non-classical side of the school, given his exemplary diligence and conduct report, and his consistent place in class (first in English, French and German) there was every reason to suggest that a place at Oxbridge was a realistic prospect.

After ‘CH’, however Albert joined the Railway Passengers Assurance Company (R.P.A.C.), working at the company’s head office, 64, Cornhill, E.C.3., in the City of London.

Sadly, neither the company nor building survives – the R.P.A.C., which offered insurance against railway accidents from its inception in 1848, was acquired by Commercial Union in 1968, which itself was involved in several mergers before ultimately becoming part of what is today, the insurance giant, Aviva.

64, Cornhill, which served as the head office between 1910 and 1966, survived the Blitz, despite a large incendiary bomb penetrating through to the second floor on 19 October, 1940 but finally met with the wrecking ball in 1987, to be replaced by a modern building designed by the Rolfe Judd Partnership. Unfortunately, there are no staff records to show exactly what Albert’s role was in 1914.

Albert’s brief career in the City was cut short, however as on 28 July, 1914, the United Kingdom declared war on Germany, with Lord Kitchener, the newly appointed Secretary of State for War calling for 100,000 men to volunteer just 10 days later on August 7 – both Albert and Frederick answered his call.

I haven’t as yet been able to establish either when or where the Cawley’s enlisted but the 1/15th (County of London) Battalion (Prince of Wales’s Own Civil Service Rifles), which had its headquarters at Somerset House on the Strand, embarked for France on 17 March, 1915, having spent more than four months billeted in Watford, and so it should be assumed that the brothers were both on board one of the four ships that took them across the channel to France.

Whilst the battalion had already seen action at both Loos and Vimy Ridge, the defining moment of the First World War for the 1/15th arguably came in 1916 with the capture of High Wood, which formed part of the infamous Somme offensive.

When the disastrous opening attacks of the Battle of the Somme commenced along the 16-mile front at 07:30 a.m. on 1 July, 1916, High Wood sat behind the second German line, occupying a strategically important ridge, south of the Albert-Bapaume road.

British troops first entered the south side of the wood as early as 14 July, as part of the Battle of Bazentin Ridge; however High Wood was subsequently retaken by the Germans, who then dug in.

At ‘zero hour’, 05:50 a.m. on 15 September, 1916, the 1/15th’s four companies, ‘A’, ‘B’, ‘C’ and ‘D’ attacked the German trenches. Whilst ‘A’ company’s advance on the right flank was deemed to be ‘immediately successful’, the other three companies were simply ‘cut up by machine gun fire’, with ‘four-fifths’ of the assaulting men either dead or wounded and the attack deemed unsuccessful.

With the help of the 140th Infantry Brigade Stokes mortar battery however, who reportedly fired around 800 rounds in just 20 minutes, the survivors renewed their attack and High Wood was in British hands by midday.

By the time that the battalion left the line on the morning of 20 September though, total casualties amounted to 15 officers and 365 other ranks, with the website of the Commonwealth War Graves Commission (C.W.G.C.) confirming that 158 of those were killed, or more than 40%.

Again, I have not been able to establish which company either Albert or Frederick were in, however given the commentary from the battalion’s war diary, which I have transcribed in full below, it could be assumed that they were part of the unsuccessful initial attack on the left flank.

Neither of the brother’s has a known grave and so both are commemorated on the Thiepval Memorial (Pier and Face 13 C) to the missing, which was designed by the architect, Sir Edwin Lutyens.

A total of 1,240 men from the 15th Battalion died during the First World War and are commemorated on a dedicated memorial, which fittingly stands on the terrace of Somerset House, overlooking the river Thames, also designed by Lutyens.

Albert is further remembered on a memorial to men of the R.P.A.C. that never returned home, where the roll of honour includes 20 names – sadly, there is no evidence of this memorial to be found in the current 62-64 Cornhill building, whilst Aviva have no knowledge of where the memorial is now cited (if at all), however a photograph does exist below.

There is in turn a war memorial dedicated to pupils of Christ’s Hospital that died in the Great War, which similarly includes Albert’s name, and is also pictured.

To come full circle, the irony of this search proved to be that the Cawley brothers possibly never set foot across 83, Paulet Road.

A sister, Daisy Ethel Cawley married on 8 November, 1915 and gave her address as 23, Warrior Road – sadly, her new husband, Sydney Hubert Macrow died just three years later on 27 November, 1918 but crucially his address at the time was given as 83, Paulet Road, Camberwell.

Whether or not the family had moved the short distance south of Camberwell New Road between Daisy’s marriage and the deaths of Albert and Frederick just 10 months later in September, 1916 will remain an unknown.

As is always the way when researching such stories, I inevitably found out far more than I was expecting to and subsequently unearthed the fact that the British artist and sculptor, Henry Moore, also served with the 1/15th Prince of Wales’s Own Civil Service Rifles during the First World War.

In a final twist, one of his sculptures, ‘Two Piece Reclining Figure No.3′ (1961) now stands on the Brandon Estate, the very place where the Cawley’s once lived.

Similarly, another of his sculptures, ‘West Wind’, (1928-29) is visible at 55, Broadway, S.W.1.,the Grade I listed headquarters of London Underground Ltd, and a building in which I used to work.

Beyond the 1/15th Battalion war diaries, which are an incredible resource to draw upon, I should also reference the excellent book, ‘History of the Prince of Wales’s Own Civil Service Rifles’, published by Naval & Military Press, which offers a detailed description of the attack on High Wood and was first published in 1922, the Aviva Group Archive http://heritage.aviva.com/, and finally Christ’s Hospital, where special mention is due to Clifford Jones, museum volunteer for his research efforts.

Battalion took part in HIGH WOOD in general attack by IV army. 17th London Battalion attached on left in HIGH WOOD, 7th London Regiment on right outside wood. ZERO 5.50 a.m “A” Company on right immediately successful and pushed through to support line. “B”, “C” and “D” Companies were cut up by Machine Gun fire & were unsuccessful. 7th Battalion on right entirely successful. 17th on left entirely unsuccessful on account of machine gun fire. 11.0 a.m. Enemy front line bombarded by Stokes Mortars. As a result of this and progress of Division on right and left, enemy surrendered and by 12 noon we were in possession of whole of HIGH WOOD & SWITCH LINE. Rest of day spent in consolidating new position in front of SWITCH LINE and in joining up with 17th Battalion on left and 7th Battalion on right. Meanwhile 6th London Regt. pushed through 7th on right & occupied E half of STARFISH and COUGH DROP. 6.0 p.m. 21st London Regt. attacked from HIGH WOOD on West half of STARFISH and COUGH DROP. Practically annihilated by Artillery & Machine Gun fire. 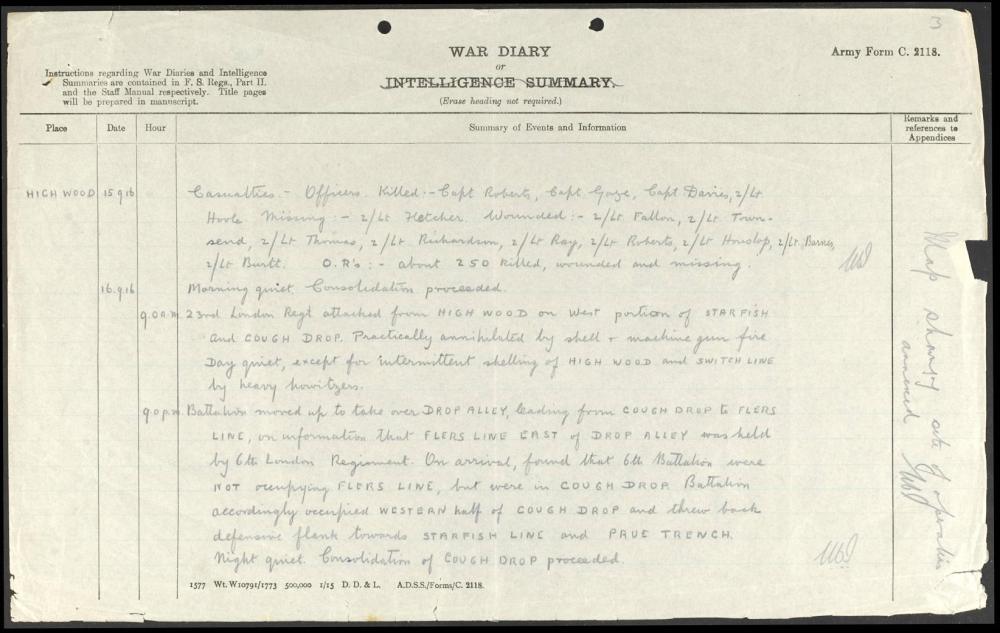